Bob Carey is the photographer and subject of the “Tutu Project.” This series of stunningly silly videos and still self-portraits was originally launched to cheer up his wife, Linda, after she was diagnosed with breast cancer, and later went viral. He speaks about the power of humor to help cancer survivors.

Professional photographer Bob Carey took a self-portrait wearing only a pink tutu after he and his wife Linda moved to New York in 2003. Eight months later, Linda was diagnosed with breast cancer, reminding Bob that laughter can be the best medicine. The tutu returned and Bob photographed himself wearing it in unlikely places—subway stations, amusement parks, beaches, parking lots—lifting the spirits of Linda and her fellow patients. The work, now referred to as the “Tutu Project,” went viral on the Internet in 2012. The overwhelmingly positive reaction inspired Bob to make a book of the images entitled Ballerina and to start a nonprofit foundation supporting women and their families during their journey with breast cancer.

What do you do to lift your spirits?
My passion is photography and creating stories through my art. When my spirits are low that generally means that I'm not doing what I love. Once I realize this I start using my journal again, to draw and write, which helps me create new imagery.

Which superpower would you most like to have? Why?
The superpower that I would like to have is one that would keep people from suffering from disease. I've lost many people in my life to cancer and would love it if others didn’t have to experience a terminal disease.

If you could meet anyone, living or dead, who would you meet? Why?
I would love to talk to Steve Jobs. It would be great to know what was going on in his head and how he handled his biggest adversities. For me, his vision, passion and belief were unmatched and he was one of the most important visionaries of the 21st century. 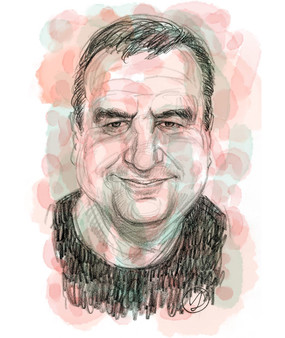