Ozzy Osbourne's career has spanned four decades and his music is as relevant today as ever. On any given day you can hear his music blasting at sporting events, in the movies, on the radio, in TV commercials, video games or on your iPod. Ozzy's not only a legend and an icon, but is a pioneer in his genre of music. He has helped open the door for countless bands by giving them their big break by taking them on tour or by taking them on Ozzfest, his all-day metal festival which is now in its 13 th year. Ozzy also opened the door for celebrities to have their own reality TV shows (although I'm not sure he wants to take credit for that).

THE NINETIES:
• Ozzy releases five records this decade. Each record goes multi-platinum.
• Ozzy has performed to millions of fans around the world. His live concerts are guaranteed sell-outs.
• Ozzy wins a Grammy Award in 1993 for Best Metal Performance for "I Don't Want To Change the World."
• Ozzy and his wife/manager Sharon launch OZZfest in 1996, the first national music festival of its kind dedicated to hard rock music and breaking new artists.
• 1.4 million fans attend the annual OZZfest music festival which Ozzy headlines.
• Ozzy donates a portion of the OZZfest proceeds to various charities across the country including Lifebeat.

THE NEW MILLENIUM:
• Ozzy wins a Grammy for Best Metal Performance in 2000 as a part of Black Sabbath for "Iron Man."
• Ozzy (with Black Sabbath) headlines OZZfest 2001. Over 1 million-plus fans attended 32 sold-out dates.
• Noted film director Penelope Spheeris shoots a full-length documentary on OZZfest titled "We Sold Our Souls For Rock 'n' Roll," that debuts at the 2001 Sundance Film Festival. Ozzy also appears in the Adam Sandler film "Little Nicky" and "Austin Powers Goldmember" (with the Osbournes).
• Ozzy receives an MTV Movie Awards 2001 nomination for "Best Cameo" for his role in "Little Nicky."
• Ozzy has released 13 albums during his 20-year career with Epic Records.
• Ozzy receives a Star on the world-famous Hollywood Walk of Fame, April 12, 2002.
• "The Osbournes" debuts on MTV to a record-breaking audience for a new program. Further episodes create a national sensation around the Osbourne family and ratings skyrocket to become the highest-ever in MTV's 22 year history. "The Osbournes" is still the highest rated series in MTV's history.
• Ozzy dines with President Bush at the Washington Correspondents Association Dinner in May 2002.
• Ozzy performs the Black Sabbath classic "Paranoid" for Queen Elizabeth's 50th Jubilee celebration at Buckingham Palace in June 2002
• Ozzy, Sharon, Kelly & Jack host ABC-TV's "American Music Awards" in January 2003.
• Ozzy, Kelly & Jack's Emmy-nominated "Pepsi Twist" commercial airs during Superbowl XXXVII (2003).
• Ozzy & Kelly hit #1 on the UK singles charts with their remake of the Black Sabbath classic "Changes." The single sold over 1 million copies.
• Ozzy and Sharon debut another MTV success with their "Battle For Ozzfest" weekly series (2004).
• Ozzy's gold-certified Prince Of Darkness box set was released in March 2005 on Epic Records.
• Ozzy performs "Crazy Train" from atop the New England Patriots football helmet September 8, 2005 as the surprise guest at Gillette Stadium in Foxboro, Massachusetts for ABC TV's prime-time "NFL Opening Kickoff 2005."
• Ozzy releases the DualDisc Under Cover in late 2005.
• Ozzy and Black Sabbath inducted at The Second Annual UK Music Hall of Fame Ceremony.
• Ozzy inducted as a member of Black Sabbath into the U.S. Rock and Roll Hall of Fame in March 2006.
• Ozzy releases Black Rain--his first album with new studio material in six years-in May 2007. The album entered the Billboard 200 album chart at #3 with over 150,000 copies sold in the U.S. Black Rain also debuted in the Top Ten on the album charts in 10 other countries: #2 (Norway), #2 (Finland), #2 (Sweden), #5 (Canada), #5 (Czech Republic), #6 (Japan), #6 (Denmark), #7 (Austria), # 8 (UK), # 9 (Germany) and #10 (New Zealand). Black Rain album sells more than one million copies worldwide and is certified Platinum in Canada and Gold in the United States.
• OZZY's first single from Black Rain, "I Don't Wanna Stop," becomes the biggest rock radio song of his career, spending 20 weeks at #1 on the R&R Rock Chart, peaking at #1 on the R&R Active Rock chart and garnered a 2008 Grammy nomination in the "Best Hard Rock Performance" category. The song is also the lead track from EA's Madden NFL '08.
• OZZY honored on VH-1's "Rock Honors" in May 2007.
• OZZY's OZZY completes an 11-month world tour in April 2008 by performing to an audience of nearly 40,000 in Sao Paulo, Brazil.
• OZZY & Metallica co-headlined the 13th year of OZZfest on August 9, 2008 in Dallas, TX establishing OZZfest as a destination festival.
• OZZY appears as an in-game character in Activision's "Guitar Hero: World Tour." Also, appears in two very successful commercial campaigns for Samsung phones and another commercial for 'World of Warcraft' video.
• OZZY is Crowned 'Living Legend' at the 2008 Classic Rock Awards in London.
• OZZY presented with the "Lifetime Achievement" award at first ever Revolver "Golden God" awards in April 2009 in Los Angeles.
• OZZY honored at a special tribute in conjunction with the 2nd Annual 'Sunset Strip Music Festival' in September 2009.
• OZZY gives rousing performance at the Rock and Roll Hall of Fame 25th Anniversary concerts at Madison Square Garden in October 2009. Ozzy performed two Black Sabbath classics with Metallica which were later broadcast on HBO.
• OZZY presented with Billboard magazine's "Legend of Live" award at 2009 Billboard Touring Awards in November 2009 in New York City.
• OZZY's autobiography "I AM OZZY" is released in January 2010 and debuts at #2 on the New York Times best-sellers list.
• OZZY ready's first new studio album since 2007's Black Rain featuring new guitarist, Gus G.•
• First single "Let Me Hear You Scream" from his new album to debut in the April 14 broadcast of 'CSI NY."

Sharon Osbourne has managed numerous artists' careers over a 30 year span including her husband, Rock Legend, Ozzy Osbourne. She is also a producer of the 15 year Ozzfest rock festival. Sharon is also credited with creating and producing the first reality celebrity TV show, "The Osbournes" for which she won an Emmy. She is currently a judge on the #1 show in the country, "America's Got Talent." It was also just announced that Sharon had signed on as a host for a panel talk show for CBS Daytime called "The Talk" which is set to debut in the Fall. Her additional television credits include hosting "The Sharon Osbourne Show," "Celebrity Apprentice" and VH-1's "Charm School". Sharon is an entrepreneur, philanthropist, a best-selling author of three books, including her autobiography, "Sharon Osbourne Extreme: My Autobiography." She lives in Los Angeles with her husband. They have three children. 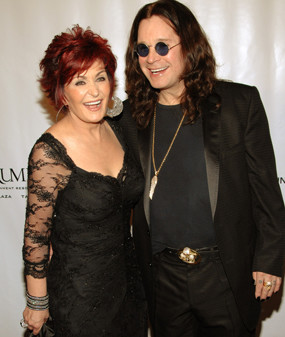