Gupta joined CNN in the summer of 2001 and became part of the network team covering the Sept. 11 attacks in New York City and led breaking news reporting on the anthrax attacks later that year.

In 2003, Gupta reported from Iraq and Kuwait as an embedded correspondent with the U.S. Navy’s medical unit, the "Devil Docs." He provided viewers with exclusive reports from points along the unit's travel to Baghdad and provided live coverage from a desert operating room of the first operation performed during the war and also performed brain surgery five times himself. Besides his battlefield medicine coverage, Gupta also reported from Kuwait immediately after a low-flying missile hit a Kuwaiti shopping mall.

In 2004, Gupta traveled to the international AIDS conference in Bangkok, Thailand, where he reported on the pandemic for CNN. In December 2004, he was sent to Sri Lanka to cover the disaster and aftermath of the tsunami that took more than 155,000 lives in South Asia. That coverage contributed to the awarding of an Alfred I. duPont Award to CNN.

The following year, Gupta contributed to CNN's Peabody Award-winning coverage of Hurricane Katrina and its aftermath. In addition to his other reporting in New Orleans, Gupta broke the news that official reports that New Orleans' Charity Hospital had been completely evacuated were incorrect, revealing that more than 200 patients remained there for five days after the hurricane made landfall.

Gupta’s passion for inspiring Americans to lead healthier, more active lives also led him to launch "New You Resolution" and later “Fit Nation,” CNN’s multi-platform grassroots initiatives against obesity. Two nationwide “Fit Nation” tours have culminated in special long-form programs that revealed the hazards of obesity in children, “Fat Chance,” and the challenges in eating healthy in a culture and regulatory environment that makes processed food so prevalent in the American diet, “Danger: Poisoned Food.”

Other documentaries have included "Quake Zone," "Killer Flu," "Sleep," “Blood Spilled” and “Rescuing Youssif” which, respectively, addressed concerns about surviving the Pakistani earthquake, avian flu, the dangers of a lack of sleep, the challenges faced by wounded Iraqi veterans and the emotional and physical journey of the recovery of a young Iraqi boy, respectively.

Before joining CNN, Gupta was a fellow in neurosurgery at the University of Tennessee's Semmes-Murphy clinic, and before that, the University of Michigan Medical Center. He became partner of the Great Lakes Brain and Spine Institute in 2000, and in 1997, he was chosen as a White House Fellow — one of only 15 fellows appointed. He served as special advisor to first lady Hillary Clinton.

Gupta has been published in a variety of scientific journals and has received numerous accolades. His health reports swept all three health and medical awards in 2006 – the first year the National Headliner Awards honored such journalism in a dedicated category. Also in 2006, his report, "Sabrina’s Law," earned him his first Clarion award, and "Charity Hospital," his first Emmy. He is also a contributor to 60 Minutes and the Evening News with Katie Couric on CBS.

In 2003, he was named one of PEOPLE magazine's "Sexiest Men Alive" and a "pop culture icon" by USA Today. In 2004, the Atlanta Press Club named him "Journalist of the Year." He has won the Humanitarian Award from the National Press Photographers Association, a GOLD Award from the National Health Care Communicators and the International Health and Medical Media award known as the "Freddie." His first book, Chasing Life, was released in the spring of 2007 and became a national bestseller and was also the subject of a one-hour documentary of the same name on CNN.

A board-certified neurosurgeon, Gupta is a member of several organizations, including the American Association of Neurological Surgeons, Congress of Neurological Surgeons, and the Council of Foreign Relations. He serves as a diplomat of the American Board of Neurosurgery and is a certified medical investigator. Gupta is also a board member of the Lance Armstrong LiveStrong Foundation. 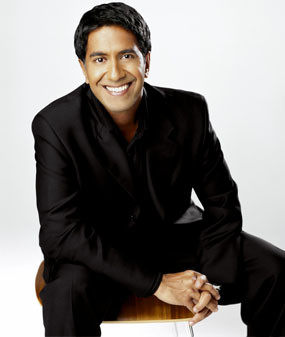