Dr. Scott Parazynski has lived and traveled all over the world, spending many of his grade school years in places like Dakar (Senegal), Beirut (Lebanon), Tehran (Iran) and Athens (Greece). A graduate of Stanford University and Stanford Medical School, he went on to train at Harvard and in Denver in preparation for a career in emergency medicine and trauma. A physiologist with expertise in human adaptation to stressful environments, he was selected to NASA's Astronaut Corps in 1992, and has flown 5 Space Shuttle Missions and conducted 7 spacewalks. Mission highlights include leading the first joint US-Russian spacewalk (during STS-86, while docked to the Russian space station Mir), serving as Senator John Glenn's crewmate and "personal physician" (during STS-95), and the EVA assembly of the Canadian-built space station arm (during STS-100).

In October 2009, Dr. Parazynski led the EVA team on STS-120, a highly complex space station assembly flight, during which he performed 4 EVAs. The fourth and final EVA is regarded by many as one of the most challenging and dangerous ever performed: he was positioned by a 90-foot robotic boom farther than crewmembers had ever ventured from the safety of their airlock, and while there had to repair a fully energized solar array wing using so-called "cufflinks" - essentially large "sutures" to stabilize the array. The tremendous coordinated efforts on orbit and on the ground by Mission Control and other engineering experts during a 72 hour period has been likened to the Shuttle-Space Station era's "Apollo 13."

As of 2015, Dr. Parazynski is the President of the board of directors of the Challenger Space Science Education. 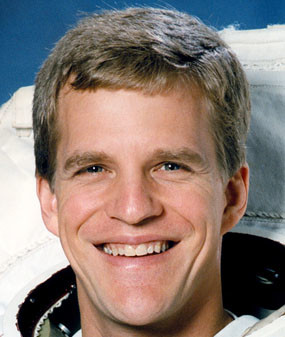