Dr. Oz was born in Cleveland, Ohio and received his undergraduate degree from Harvard University (1982) and obtained a joint M.D. and MBA (1986) from the University of Pennsylvania School of Medicine and Wharton Business School. He was awarded the Captain’s Athletic Award for leadership in college and was Class President followed by President of the Student Body during medical school. He lives in Northern New Jersey with his wife Lisa of 23 years and their four children, Daphne, Arabella, Zoe, and Oliver.

Previously, Dr. Oz was a featured health expert on “The Oprah Winfrey Show” for over five seasons, spanning 55 episodes. He has also served as chief medical consultant to Discovery Communications, where his “Transplant!” series won both a Freddie and a Silver Telly award. In addition to numerous appearances on “Good Morning America,” he has also appeared on the “Today” show, “Larry King Live,” “The View,” guest-hosted the “Charlie Rose” show and appeared on all the evening news broadcasts. He also served as medical director of Denzel Washington’s “John Q” and participated in several other feature films.

Dr. Oz authored five New York Times Best Sellers including “You: The Owner’s Manual”, “You: The Smart Patient”, “YOU: On a Diet”, “YOU: Staying Young”, “YOU: Being Beautiful” as well as the award winning “Healing from the Heart”. His new book, “YOU: Having a Baby,” will be published by Free Press on December 1, 2009. He has a regular column in Esquire magazine and O, The Oprah Magazine and his article “Retool, Reboot, and Rebuild” was awarded the 2009 National Magazine Award for Personal Service.

Dr. Oz is also the host of a daily talk show on Sirius XM Radio’s “Oprah Radio” on XM Channel 156 and Sirius Channel 195 (as part of its “Best of XM” package).

In addition to belonging to every major professional society for heart surgeons, Dr. Oz has been honored as one of Time magazine’s 100 Most Influential People (08), Esquire magazine’s 75 Most Influential People of the 21st Century, a Global Leader of Tomorrow by the World Economic Forum (99-04), and “The Harvard 100 Most Influential Alumni” in the 02138 magazine, as well as receiving the Ellis Island Medal of Honor (08). He won the prestigious Gross Surgical Research Scholarship, and has received an honorary doctorate from Istanbul University, He was voted "The Best and Brightest" by Esquire Magazine, a “Doctor of the Year” by Hippocrates magazine and “Healer of the Millennium” by Healthy Living magazine. Dr. Oz is annually elected as a highest quality physician by the Castle Connolly Guide as well as other major ranking groups. 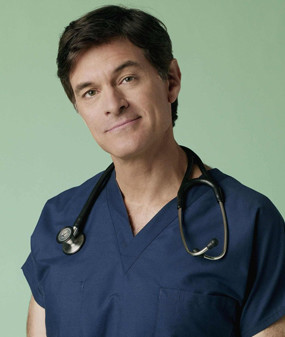