Mezzo-soprano Laurie Rubin gives an emotional performance that makes us feel capable of breaking through our fears and achieving our dreams. She is accompanied by her wife, Jenny Taira, on the keyboard.

Mezzo-soprano Laurie Rubin’s voice, spirit, and story captivate audiences. According to The New York Times classical music critic Anthony Tommasini, she possesses “compelling artistry,” “communicative power,” and an “earthy, rich, and poignant” voice. Laurie has presented concerts at places like the Kennedy Center, the Lincoln Center and the White House. Laurie is co-artistic director, co-founder, and resident voice teacher of Ohana Arts, which recently presented an original musical (lyrics by Laurie), Peace on Your Wings, about the life of a young Japanese girl who suffered from the Hiroshima bomb. Her album and memoir, Do You Dream in Color, details her experiences of living an adventurous life while blind, inspiring audiences of all ages to reach for their dreams.

Mezzo-soprano Laurie Rubin, who is blind, describes her world of color
Brown, DL. The Washington Post. 2012.

Do You Dream In Color? Insights from a Girl Without Sight
Rubin, L. Triangle Square. 2013. 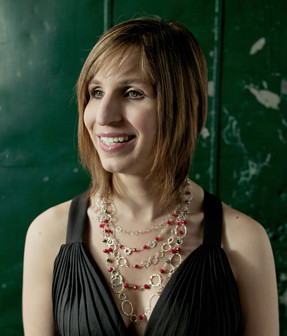