NANDA is a high-energy troupe of comic actors who delight in calculated chaos, kung-faux fighting, and irreverent pop-culture parodies. Their performance literally turns everything upside down, including themselves, with a mishmash of traditional theater, vaudeville, and circus, utilizing dance, juggling and acrobatics.

Characterized by a calculated chaos of comedy, high-energy kung-faux fighting, and irreverent pop-culture parodies, NANDA has been presenting original action-packed, theater-based shows since 2004. Their performances are a mishmash of traditional theater, vaudeville, and circus. They utilize dance, juggling, and acrobatics in a form they call acrobaticalism. The four performing members of NANDA grew up together in Pt. Townsend, Washington and developed a vision of limitless creative play that has become the essence of their performance art. Their explode-out-of-the-box mentality has inspired extensive explorations into a variety of other avenues, including live video projection, animation and sound, and consultations for corporations. No matter where or for whom they perform, NANDA always creates an amazingly lively and humorous sensory experience. NANDA is: Misha Fradin, Chen Pollina, Kiyota Sage, and Tomoki Sage.

Which superpower would you most like to have?
Advanced telekinesis. This would allow us the power to do almost anything. We could make each other fly. We could juggle an unreasonable number of props. Our fight sequences would be unreal! That would be pretty cool!

What sparks your imagination?
Everything! Reality is just a bunch of imagination. The ultimate mysteries of life; life itself, and the universe.

If you were immortal for a day, what would you do?
We would put on wingsuits and fly down a mountain.

The Jacket: Live Ninja Theater
Teeming with juggling, acrobatics and high-energy fight sequences, “The Jacket” redefines the modern ninja with a deft combination of comedy and absurd pop-culture references making for an entirely original work of fast-paced, eye-popping theatre. 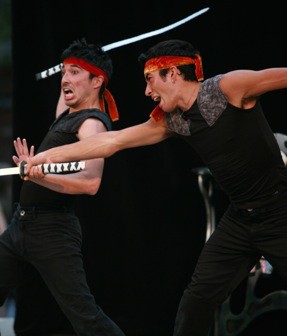