Dr. Anita Goel, M.D., Ph.D., founded Nanobiosym as an R&D innovation engine and hi-tech incubator at the convergence of physics, nanotechnology and biomedicine. Over the past 15 years, her pioneering contributions to this interface have been recognized globally by prestigious honors and awards. Her work at Nanobiosym has received multiple awards from US Governmental agencies such as Defense Advanced Research Projects Agency (DARPA), Department of Defense (DOD), Department of Energy (DOE), Air Force Office of Scientific Research (AFOSR) and US Defense Threat Reduction Agency (DTRA). She established Nanobiosym Diagnostics to commercialize the Gene-RADAR technology platform to empower people worldwide with rapid, accurate and portable diagnostic devices. She launched the Nanobiosym Global Initiative to build innovative partnerships with academic, commercial, and global thought leaders, NGO’s, industries, governments and global organizations who can help bring disruptive technologies like Gene-RADAR to sustainably address some of the greatest unmet needs in both the developing and developed worlds.

A Harvard-MIT trained physicist and physician, Dr. Goel was named as one of the world’s “Top 35 Science and Technology Innovators under the age of 35” by MIT Technology Review. Among other awards and prizes, she received the “Global Indus Technovator Award” from MIT, an honor recognizing the contributions of top leaders working at the forefront of science, technology, and entrepreneurship. She holds a Ph.D. in Physics from Harvard University, an M.D. from the Harvard-MIT Joint Division of Health Sciences & Technology (HST), and a BS in Physics with Honors and Distinction from Stanford University.

Dr. Goel has a deep passion for fundamental science, especially elucidating the physics of living systems at the nanoscale. Her work in applied science harnesses these fundamental insights to develop next-generation nanotechnology platforms like Gene-RADAR for portable disease detection and nanosystems for novel energy harvesting and biocomputing applications. Some of her recent publications include “Molecular Evolution: a role for quantum mechanics in the dynamics of molecular machines that read and write DNA,” in the book Quantum Aspects of Life and “Harnessing Biological Motors to Engineer Systems for Nanoscale Transport and Assembly” in Nature Nanotechnology.

Dr. Goel has been an invited keynote speaker at many major international conferences, symposia, and university colloquia and often gives Guest Faculty Lectures at Harvard and MIT. She was recently invited to chair a Roundtable on “Using Science and Technology as a Tool for International Diplomacy” at the 2009 Science and Technology in Society Forum in Kyoto, Japan. Senator John Kerry invited her to give expert testimony before the US Senate Subcommittee on Science, Technology and Innovation to support the reauthorization of the $1.5 billion U.S. National Nanotechnology Initiative. While at Stanford, she envisioned building new hi-tech bridges between developed and developing world economies and founded and chaired an international conference and think tank (SETU – Sanskrit for ‘bridge’), comprised of world leaders from academic, business, socio-political, and humanitarian arenas.

Dr. Goel is a Member of the Board of Overseers of the Boston Museum of Science and a Charter Member of TiE (The Indus Entrepreneurs, a global organization of successful entrepreneurs engaged in the cycle of wealth creation and giving back to society). Dr. Goel is also a Fellow of the World Technology Network, a Fellow-at-Large of the Santa Fe Institute, an Associate of the Harvard Physics Department and an Adjunct Professor of the BEYOND Institute for Fundamental Concepts in Science and Arizona State University. She also serves on the National Board of the Museum of Science and Industry, on the Nanotechnology Advisory Board of Lockheed Martin Corporation, and on the International Advisory Board of the Victoria Institute of Science and Technology. 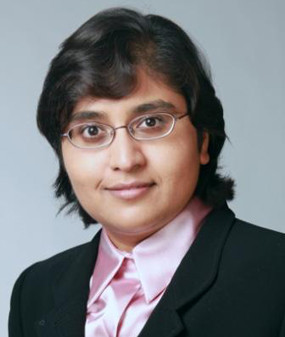